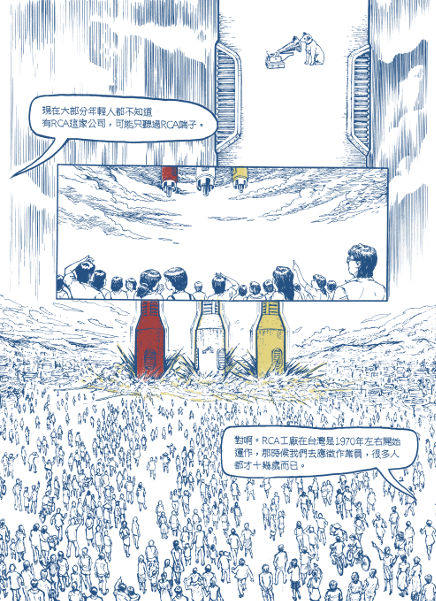 Social movements are portrayed by the media as conflicts of interests, breakdowns in social order, government inadequacies, or public discontent. But behind every so-called “incident” is suffering that cannot be counted and shortcomings that laws cannot truly remedy. It is only by seeing past the demands of protestors and past legal regulations that we can truly understand those who stand on the frontline. This understanding is where Frontline Z.A. starts: five authors from Taiwan who have used images to document the real physical and emotional feelings of those within social movements, as well as some of the phenomena of the frontline itself.

--CHEN Che
Drawing from a written account of the social movement that occurred during March and April 2014, Chen Che has depicted the complex details of the Taipei citizens' occupation movement. As time moves backwards, in the first half she shows the vortex-like intersection of dynamic conflicts, and in the latter half she shows the static, stretching protests, highlighting the tension between the individual and the group.

--YANG Yu-Chi
Based on Yu-Chi's personal interviews with the Former RCA Employees' Care Association and his recollection of the courtroom proceedings, this work combines metaphor with the ex-workers' descriptions to depict their courageous protests and courtroom battles, their long years of physical and emotional suffering caused by the factory pollution, and the cold responses of the accused.

--HUANG Li-Pei
Through contact with young friends long involved in the Losheng movement, the author deftly explores the connection between an outsider and one involved in the social movement. She describes how this pair of complete strangers become comrades on this field of battle, drawn together not by something so simple as a desire for justice but by a shared feeling of loss and longing.

--Candy Bird
Street artist Candy Bird is no stranger to social movements; here he addresses in a sit-in railway protest the parallel space between protestors and onlookers, seeking the intersections between the two.

--Jimmeh Aitch
These cartoon headlines channel South Park and Charlie Hebdo, highlighting some of the chaos lurking in Taiwan social movements. At the same time, they push the limits of tolerance for South Park-like Western humor.