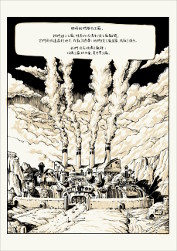 Have you already bought a barbie toy for your children or in your childhood ?

Do you know that before "made in China" these thing was "made in Taiwan" ?

Maybe it doesn't matter to you that was made in China or in Taiwan or in Indonesia ….

Anyway, it was kind of place so far from you like the penguin land at that time.

In this graphic documentary work, Yuchi won't show you how thing was happened, how much people got paid, fair or unfair. He just show you what was the life of these worker who make dolls for you and how they feel.

In 90s, a lots of Taiwanese factories moved to China for the cheeper workers, nowadays they are going to move again to Vietnam, to Myanmar, or to Indonesia for the same reason. This story continue in our days.

This work is specially inspired from the experience of author's mother. But it also mix the story from her different colleague.

Yu-Chi's mother worked in a doll factory during almost 20 years, just few months before her retirement, the factory announced that they were going to transfer the factory to the mainland China. All their basic employers loos their job, fortunately she still got her severance pay. But she didn't get enough pension that she should have, so she continued to work in several food factories to keep the basic life for her family. In those factories, some of them threw out all the food expired only one day ; some of them asked the worker to take out the mold of long-time expired food and repacked it to sell. She began to work form 14 yeas old, and retired at 61 years old.

This work does not only pay the tribute to his mother, but also telling the story of so many base workers in Taiwan. These people can't even have a correct retirement after working tough for so many years,

Author transfer the whole background as a penguin world, so that we could focus on the feeling and the emotion of characters without to much heaviness from the image of the human being. The whole story is without the dialogue, only present with the elements such as image, movement, facial expression and light. Under the refined drawing of Yu-Chi, this story is full of emotion but without to much sadness.